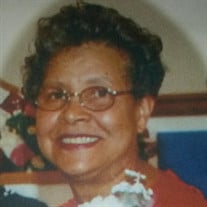 Elnora Louise Claud (71), formerly of Aulander, NC, went to her heavenly home on Saturday 3/05/2016 at Retreat Doctor's Hospital in Richmond, Virginia. She was the daughter of the late Wilbert and Sarah Howard of Aulander, NC. and she was preceded... View Obituary & Service Information

The family of Elnora Louise Claud created this Life Tributes page to make it easy to share your memories.

Send flowers to the Claud family.