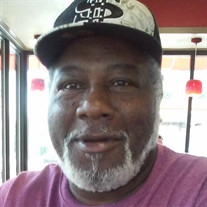 Garry L. Hill (62), was the son of the late William Franklin Hill, Sr. and Ella Norman Hill of Washington County. Garry attended the Washington County Schools and graduated from Creswell High School. After graduation he moved out of state, living in both Delaware and Maryland, before returning home to care for his aging parents. Garry was employed by Wal-Mart as a stock clerk before retiring, do to his declining health. Garry was a doer who loved his family and was always willing to help when he could. He loved cooking, fishing and was a die hard Redskin fan. Garry leaves to cherish his memories his wife of twelve years, Ollie Boone Hill; sons, Garry Hill, Jr. of Roper, NC and Franklin H. Hill of the home; daughters, Demeshaun Norman, Lawanda Norman both of Roper, NC and Stephanie Hill of Maryland; sisters, Marjorie Gilbert and Naomi Armstrong of Delaware, Sarah Gilbert of Plymouth, NC and Rovina Winbush of Williamston, NC; brothers, William H. Hill of Plymouth, NC, William F. Hill, Jr. of Jamesville, NC, Lenal Hill of Roper, NC and Fredrick Hill of Windsor, NC.; a host of other relatives and friends.

The family of Garry Leon Hill created this Life Tributes page to make it easy to share your memories.

Send flowers to the Hill family.