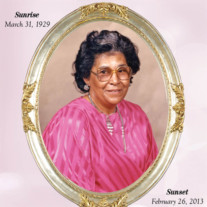 Gwendolyn "Elaine" Lewter Cherry was born on March 31, 1929 in Roxobel, North Carolina, to the late Pauline Cherry Lewter and Charlie H. Lewter. As the eldest of 10 children, she learned responsibility which endured throughout her life. She departed this life for a better one on Tuesday, February 26, 2013 at Piedmont-Henry Medical Center, Stockbridge, GA. On January 4, 1946, she joined in matrimony to the late Charleston W. Cherry and they moved to New York City. Together for 45 years until Charleston's death, they raised 5 children. While living in New York, she attended Trinity Lutheran Church, in Wyandanch and later joined Hollywood Baptist Church in Amityville where she was a member of the Missionary Circle. Elaine began her career in the health care field working as a Nursing Assistant at several hospitals in New York. Elaine was employed as a Heath Guide Supervisor for Suffolk County Department of Health where she was instrumental in expanding healthcare from pediatrics to adult care, and later was employed by the New York State Department of Health as a Public Health Investigator. She remained there until 1974 when she and Charleston moved to North Carolina with three of their children Monica, Delphine and Dwayne. She became an instructor of continuing education at Roanoke-Chowan Technical Institute and health care supervisor at Gates County Health Department in Winton, NC. Of all her health care work she was most proud of her work as Lay Health Advisor for Save Our Sisters, a North Carolina Breast Cancer Screening Program where she counseled African American women in Bertie County, NC on the importance of breast cancer detection and screenings. Elaine was one of eleven women chosen for this work after being identified by her community as a true community leader and one whom others turn to for advice, help and comfort. She lived her life as a Christian every day. After moving to North Carolina, she became a member of Piney Wood Chapel Baptist Church, Ahoskie, Nc where she attended faithfully until her health declined. She was proud of her church membership and her service to the Lord and worked on numerous projects and committees within the church. She was selected by the late Pastor Matthew R. Silver as a Deaconess. She served as Senior Missionary Circle Secretary, Pastor's Aide Secretary, Vice President and President, and also a member of the Kitchen Committee for several years. During her stays in Richmond, VA she joined Faith Community Baptist Church, where she was induced into the Elders Circle. Elaine was the go-to person in the community and her children, for childcare needs, sewing and tailoring needs, and even marriage counseling. No matter how troubled they were when they got to the door, they always had a smile on their face when they left. She leaves to cherish her memory and celebrate her life and legacy, four daughters, Joan Cherry Woodhull (Richard) of Dix Hills, NY, Monica Cherry of Richmond, VA, Charlene Lockett (Jesse) of Huntsville, AL, Delphine Talley (Wilber) of Richmond, VA and one son Dwayne Cherry (Deidra) of Mechanicsville, VA, eight grandchildren (one deceased), six great-grandchildren, one brother Henry Lewter of Richmond, VA; four deceased sisters and four deceased brothers; nieces, nephews and a host of other relatives and friends. Most importantly, she always had a scripture on her mind and the Word in her heart.

Gwendolyn "Elaine" Lewter Cherry was born on March 31, 1929 in Roxobel, North Carolina, to the late Pauline Cherry Lewter and Charlie H. Lewter. As the eldest of 10 children, she learned responsibility which endured throughout her life. She... View Obituary & Service Information

The family of Gwendolyn Cherry created this Life Tributes page to make it easy to share your memories.

Send flowers to the Cherry family.