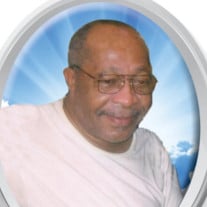 Mr. James Albert Futrell was born in Aulander, NC in Hertford County in August 14, 1934 to the late Albert Futrell and the late Bettie Sue Futrell. He departed from this life on February 4, 2013 at his residence in Woodland, NC at 12.00 AM. In... View Obituary & Service Information

The family of James Futrell created this Life Tributes page to make it easy to share your memories.

Send flowers to the Futrell family.