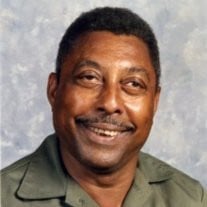 James Junious Holloman was born on August 31, 1925 to the late Casius Hall and Janie Holloman in Hertford County, North Carolina. He was married to the late Mamie Twine Holloman who receded him in death. To this union eight (8) children were... View Obituary & Service Information

The family of James Junious Holloman created this Life Tributes page to make it easy to share your memories.

Send flowers to the Holloman family.