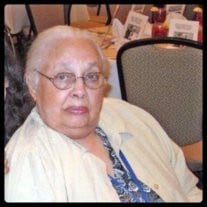 Josephine Elizabeth Pierce, was a devoted mother, daughter, sister, Christian, and employee. Josephine went home to our God and Savior on August 13, 2013 at Vidant Hospital after a long and difficult fight. She was married twice; first to Reginald James. This union produced two fine sons; Reginald Dwight James, Jr. and William Christopher James, both of Ahoskie, NC. The second union with James Archer produced one daughter; Robin Lena Archer of Indianapolis, IN. Josephine was born on September 9, 1925 and was the first of the fifteen children born to William and Lessie Pierce. She was devoted to God and family and always attempted to set an example for others. She had a passion for reading and education and believed in holding on to family history and memories. Due to health issues, Josephine spent her later years at Kindred Care and Rehabilitation. She participated in arts, crafts, and reading that she so loved. Josephine’s life started in the Newsome Grove Baptist Church. It was here that she served as a teacher of the third Sunday School Class, Vice President of the Missionary Circle, later as President of the Missionary circle and Church Clerk. She attended school at the Robert L. Vann School and later received a certificate from the Roanoke-Chowan Technical Institute in Arts and Crafts. She was employed by Roses in 1965, first as a salesperson. As time progressed, she was promoted to the position of Division Manager and then that of Ordering Specialist. Her career came to an end in 1987 when she was taken seriously ill. Even though chances for a complete recovery were slim Josephine proved that she was a fighter and survivor. She overcame this illness much to everyone’s surprise. She was able to return to work but only on a part-time basis. Her accomplishments in her career include Recognition for Good Citizenship, five Division Manger Awards, and District Division Manager Winner. Awards that Josephine should have received but were not available was that of always being there when someone needed her, whatever was asked of her, being an outstanding daughter, sister, mother, grandmother, great-grandmother and aunt. Josephine is survived by two children, Dwight James and Robin Archer. Her sisters - Gerlean Beverly of Philadelphia, PA, Vernell Alston of Franklinton, NC, Lucinda Holloman of Fair Oaks, CA, Janice Jones of Lovettesville, VA and Alma Wright of Edison, NJ. One grandson, Daryl James of Georgia, two daughters-in-law: Beryl James and Ella Mae Hillard both of Ahoskie, NC; two granddaughters, Josephine Jenkins of Ahoskie, NC and Katherine Freeman of Raleigh, NC; eight great-grandchildren, a host of nieces, nephews, cousins and friends. Josephine will be greatly missed, always loved and forever in our hearts.

Josephine Elizabeth Pierce, was a devoted mother, daughter, sister, Christian, and employee. Josephine went home to our God and Savior on August 13, 2013 at Vidant Hospital after a long and difficult fight. She was married twice; first to... View Obituary & Service Information

The family of Josephine Pierce created this Life Tributes page to make it easy to share your memories.

Send flowers to the Pierce family.