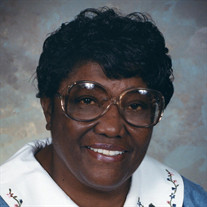 Mary Louise Ashe, affectionately known as “Sister”, was born on January 25, 1938 to the late James Selma and Susie Anna Vaughan Outlaw. She was preceded in death by her husband of over 20 years, Alphonso “Al” Ashe. She fell asleep in death on Sunday, January 11, 2015 at Creekside Care and Rehabilitation Center in Ahoskie NC. Mary was employed for many years as a cook at Guardian Care, and later retired from Perdue Farms. Following retirement, Mary spent her time doing what she enjoyed most, cooking and feeding others. She devoted her life to nurturing and caring for other people. She attended Calvary Missionary Baptist Church where she was a faithful member until her health declined. Mary was a wonderful mother, sister, and aunt to many. Mary was married to the late Joseph James “Shug” Reid early in life. They took on the responsibility of raising his four sisters: Beulah White, Wilma Walker (both deceased), Patsy Owens (Ronald) and Hattie Reid of Highland, CA. After these set of children, they raised as their own: Howard Lee Reid (Angie), Lynette Trice, Malia “Buddy” Curry, Clayton “Pete” Reid, all of Durham NC and Ann (George) Bennett of Ahoskie NC. She was preceded in death by her brothers: James Curtis, Bravie Lee, Rudolph Francis, Tommie, and Charles Vann; and her sisters: Augustine Gatling, Peggy Ann Williams, and Bernice Sessoms. She leaves to cherish years of love and memories: her daughter Detrice “Granny”Rojas (Carlos) of Ft. Worth TX; two grandsons: Deron Howington (Ashley) and Corey Howington of Raleigh NC; two great grandchildren: Kiley and Kayla; two brothers: Howard Earl (Esther) and John Albert (Bonnie) all of Ahoskie NC; one half-brother, Jessie Twine (Cynthia) of Delaware; a special niece, Charla Outlaw of Raleigh NC; a host of nieces, nephews and other relatives and friends. Mary had some very dear friends to include, Alma “Baby Sister” Outlaw, Joe “Chalk” Gatling, Herbert “Rudolph” Sessoms, and Virginia Powell, all of Ahoskie NC, and Walter “Bernard” White of Hampton, VA.

The family of Mary Louise Ashe created this Life Tributes page to make it easy to share your memories.

Send flowers to the Ashe family.