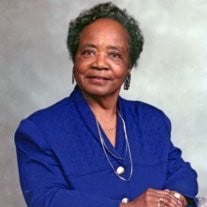 Mary Satterwhite Lewis Watkins departed this world surrounded by her immediate family and made her transition into the spiritual realm on June 12, 2013 at 7:49 pm in Louisburg, North Carolina at the tender age of 91. She was born in Ahoskie, NC to the late Alexander Satterwhite and the late Madie Freeman Satterwhite on January 24, 1922. As a young child, Mary became a member of The Newsome Grove Baptist Church but also attended and supported The New Ahoskie Baptist Church where other family members served. Mrs. Watkins attended C. S. Brown High School in Winton, NC and subsequently graduated from Elizabeth City State University, Elizabeth City NC. Mary also pursued a Master’s Degree at North Carolina Central University in Durham, North Carolina. After graduating from Elizabeth City State University, Mary married the late William Henry Lewis, the owner of a taxi company, Lewis Shoe Shop, café and barbershop. Mr. Lewis also was the first Afro-American hired to work at the Western Union Telegraph Office (carrying telegrams), Ahoskie Post Office (handling mail) and the Bank of Ahoskie (taking pictures of checks). Due to William Henry being a Free Mason, Mary became a charter member of the Rose of Sharon Order of the Eastern Star No. 600. From this union a daughter, Brenda, was born. After the death of her first husband, Mrs. Watkins married Mr. George Watkins from Norfolk, VA who was a carpenter and builder of homes. Mrs. Watkins worked for 30 years as a teacher in the counties of Bertie (John Bonds Elementary School) and Hertford (Robert L. Vann and Ahoskie Elementary) school systems. During her tenure as a teacher, she received many certificates and awards for meritorious service. Her former students often attest to the fact that Mrs. Watkins was an excellent teacher, loved her students, and disciplined them well. Ms. Mary was a member of the Hertford County Retired School Personnel. Mary Satterwhite Lewis Watkins loved fishing, teaching and her family. She leaves behind a daughter, Brenda Lewis-Flowers (William Jr.) and four grandchildren William Leon III, Cornelius Alexander, Shar-Narné LeFleur and Shaka-Ensonig T’imbre; sisters Elizabeth Deloatche, Christine McCullough, Madie Bradley, Naomi Singletary, Shirley Thompson, Avoyne Mikula; as well as a host of nieces, nephews, cousins and friends. Mary was loved by her family and the community she served. Her kind deeds performed for family and friends were many. She remains alive in the hearts of all those who knew her.

Mary Satterwhite Lewis Watkins departed this world surrounded by her immediate family and made her transition into the spiritual realm on June 12, 2013 at 7:49 pm in Louisburg, North Carolina at the tender age of 91. She was born in Ahoskie,... View Obituary & Service Information

The family of Mary Watkins created this Life Tributes page to make it easy to share your memories.

Send flowers to the Watkins family.