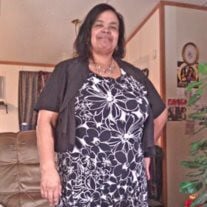 Mary Jean was born, August 4, 1953 to Sandy McGuire, Jr. and Jennie R. Wade McGuire in Halifax, North Carolina. She departed this life on March 19, 2014. Mary was married to Francis White on September 13, 1998. At an early age she joined... View Obituary & Service Information

The family of Mary White created this Life Tributes page to make it easy to share your memories.

Send flowers to the White family.