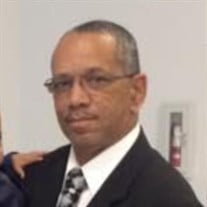 Randy Boone Sr. (60) departed his earthly life on October 3, 2021 in Portsmouth, Va. He was the son of Ms. Ola Mae Long Boone and the late Mervin "Buck" Boone of Conway, NC. Randy received his formal education in and graduated from the public... View Obituary & Service Information

The family of Randy Boone Sr. created this Life Tributes page to make it easy to share your memories.

Send flowers to the Boone family.