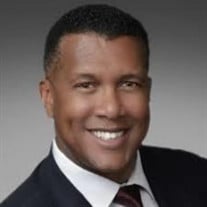 On Saturday, January 30, 2021, Robert Wilbert Pettiford, affectionately known as Rob, loving son, husband, father, brother, uncle, nephew, cousin, and son-in-law, passed away at age 54. Rob was born on November 12, 1966 in Franklin, Virginia to Joseph B. Pettiford Sr. and Gladys E. Pettiford (Howard). As a young boy, Rob was very lively and adventurous, often emulating the physical and acrobatic antics of his childhood stunt hero while riding his bicycle. Rob received his elementary education in the Alexandria Public Schools, graduating from T.C. Williams High School in 1985. In high school, he was active in marching band and symphonic band where he played alto and tenor saxophone. Having participated in many sports to include soccer, football and track growing up, Rob excelled academically and in high school became a scholar-athlete, participating in Penn Relays and broke several discus and shotput records at T.C. Williams. He graduated from Virginia Tech University where he received his undergraduate degree in engineering. He received his executive master’s in business administration and an executive master’s degree in Technology Management with a minor in Marketing from Stevens Institute of Technology in Hoboken, New Jersey. He also possessed a project management certificate from George Washington University. In July 1996, he married his beloved wife and fellow Hokie, Antoinette Coleman. To this union, two daughters were born: Chase and Jordan Pettiford. Rob was a devoted father and a proud, self-professed #GirlDad. From coaching soccer, to selling Girl Scout cookies or acting in the latest film project, Rob always encouraged and supported his daughters in their various interests. During his professional career, he worked in several senior executive management Director and Vice President positions using his skills and talents at such organizations as AT&T, Frontier Communications, Time Warner Cable, Cox Communications and Altice USA. Rob was one of those rare individuals who loved every aspect of his profession. Whenever he would travel for a business trip, he would always say: “Remember, I’m doing what I love.” Being of service is a legacy Rob has passed down to his daughters. He was the Vice Chairman on the Board of Directors of the Georgia Symphony Orchestra and served on the Board of Directors of Easter Seals New Jersey. Rob also served his community on the Falls of Autry Mills HOA as a member and also as Board President. Rob was an avid music and movie lover, golfer, fisherman and loved to travel. His love of music became the girls’ love through the song of the week he shared with them. Rob was known for his quick wit, his infectious smile, and his kind and compassionate spirit which won him many friends. Rob is survived by his parents, Joseph Sr. and Gladys Pettiford of Alexandria, VA, his wife Antoinette and his two daughters, Chase and Jordan Pettiford of Atlanta, GA, his sister Dianna Williams (Kenneth B. Strother) of North Carolina, his brother Joseph Jr. (Kim) of Virginia, son-in-law of Rose and Allen Hill and Ike and Tootsie Coleman, many aunts, uncles, cousins, nieces, and nephews. A private graveside funeral service will be held in Aulander, NC. **In Lieu of Flowers**: Info for donation to Georgia Symphony Orchestra: Donations may be made in Robert Pettiford’s memory using one of two methods: For checks - please make a notation on the check indicating that the donation is made in memory of Robert Pettiford - to be mailed to: Georgia Symphony Orchestra PO Box 791 Marietta, GA 30061 Online donation portal at https://www.georgiasymphony.org/donate/ If using the online donation portal, please click on the tab that reads "In Memory of/In Honor of." A question is then asked if they would like to dedicate the donation. If they respond "Yes, please", they may then insert Robert Pettiford so that we may know that the donation was made in his memory.

The family of Robert Wilbert Pettiford created this Life Tributes page to make it easy to share your memories.

Send flowers to the Pettiford family.