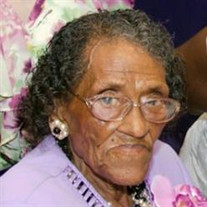 Thelma Kaye Cooper Saunders was dispatched by God into the loving care of the late Frank Cooper and Clara Simmons Cooper (Reid), March 19, 1921. She was the eighth of nine children. Thelma married the late Clayton (Bud) Saunders. They shared approximately fifty-five years together. To this union was added one daughter, Evelyn. Thelma accepted Jesus Christ as her Savior. She later joined Elm Grove Baptist Church with her husband, and remained a faithful member until her death. She was a member if the Senior Choir and the Deaconess Board. During her later years, even into her nineties, she regularly drove herself to worship at Calvary Baptist Church and occasionally Soul Saving Station. Thelma was affectionately known as “Dear-Dear” by her grandchildren and to others “Mother Dear”, who she helped “raise”. She was very family-oriented and was a care-giver to her aunt, siblings and others when necessary. She was always willing to lend a hand to a friend, neighbor, or someone in need. Many years of her life were devoted to nurturing and giving care to her loved ones. She enjoyed activities with family members, especially spending time talking with them. She also enjoyed taking drives around town. During her younger years, she enjoyed fishing and crabbing with her sisters. One of her hobbies was canning. She enjoyed making and sharing her pear preserves and watermelon rind pickles. She was known by family and friends as a compassionate person with a big heart, and great sense of humor; who spoke her mind. She was blessed to live almost ninety-four years, to see her grandchildren and great grandchildren become adults and to be able to enjoy her great-great grandchildren. In addition to her parents and husband, she was preceded in death by her daughter, Evelyn, and her siblings Richard, Hughie, Mary, Irene, Gracie, Freeman, Nannie, and Theresa. Left to cherish her memories and carry on her legacy are one granddaughter, Bonnie Outlaw whom she raised (John);one grandson, Michael Joyner, two great-granddaughters Jahmelia Outlaw and Tiffanee’ Swain (Antoine); two great–great grandchildren Jeremiah and Londyn, a very caring neighbor Janette Harrell and a host of nieces, nephews, cousins and friends. God, in His infinite wisdom, and love dispatched angels to escort her to her heavenly home Thursday evening, February 12, 2015. She will be missed by many.

Thelma Kaye Cooper Saunders was dispatched by God into the loving care of the late Frank Cooper and Clara Simmons Cooper (Reid), March 19, 1921. She was the eighth of nine children. Thelma married the late Clayton (Bud) Saunders. They shared... View Obituary & Service Information

The family of Thelma Saunders created this Life Tributes page to make it easy to share your memories.

Thelma Kaye Cooper Saunders was dispatched by God into the loving...

Send flowers to the Saunders family.